Blue Grid, an Athens based company leading the development of the alternative fuels market in Southeastern Europe, has joined the Molgas group of companies

Blue Grid, an Athens based company leading the development of the alternative fuels market in Southeastern Europe, has joined the Molgas group of companies, after receiving a significant investment from the latter. Blue Grid, incorporated in 2017, is developing alternative fuels supply chains delivering environmental, economic, and operational benefits to a wide range of customers. The company’s current activity focuses on supplying LNG as a fuel to 3 main customer segments: 1) industrials and other end-users, 2) road transport and 3) marine transport (bunkering). Blue Grid’s broader scope includes LNG, renewable methane and bioLNG as well as hydrogen-enabled e-fuels. Molgas is the leading downstream supplier of LNG in Europe, supplying volumes in excess of 6TWh of LNG per year to over 200 industrial customers, 34 LNG fueling stations, as well as a growing number of marine customers, by utilizing 2 LNG Bunkering vessels and 9 satellite LNG terminals across the Norwegian coastline. Molgas is active in 8 countries in Europe, including Norway through its fully owned subsidiary Gasnor, a company acquired from Shell in 2021. Molgas is owned by funds managed by InfraVia capital partners, a Paris based Private Equity fund specialized in infrastructure investments. Following Molgas’ investment, Blue Grid will focus on accelerating growth in LNG and bioLNG supply in the broader region of SE Europe and the Eastern Mediterranean. Offering a full scope of services including onshore and off-shore transportation of LNG, storage, and small-scale regasification, Blue Grid will develop end-to-end supply chains delivering fuel to final customers including onshore end-users (industrials, greenhouses, commercial buildings and hotels), LNG fueling stations, remote city-grids, and marine customers in the region’s main ports. Blue Grid will also actively develop bio-methane and bio-LNG production capabilities, as well as hydrogen production activities, where these are applicable. Molgas’ investment comes at an opportune time, considering the imminent commissioning of the Revithoussa truck-loading terminal, anticipated for the summer of 2022, which will allow reliable and competitive supply of LNG to final customers in the SE European region. DESFA, the Revithoussa terminal owner and operator, is also constructing a small-scale LNG reloading jetty on the island of Revithoussa, expected to be operational by the end of 2023. Blue Grid aims to be one of the first physical suppliers of LNG to marine customers in the port of Piraeus, and to this end, is planning to have an LNG Bunkering vessel available in alignment with the commissioning of the jetty. “We are proud to have Molgas on-board, and view this investment as a vote of confidence in the work that we have been doing in the region over the past years” said Sofoklis Papanikolaou, founder and CEO of Blue Grid. Fernando Sarasola, CEO of Molgas, said “the Southeastern European region is the next frontier for small-scale LNG and alternative fuels, and Blue Grid is perfectly positioned to capture this market. We are very excited to be joining our forces and I am confident that together we will be bringing a lot of value to a wide range of customers”. 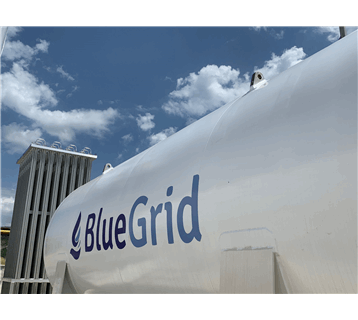